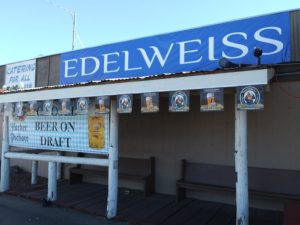 Lovers of German food and German beer have always had it tough here in Arizona. Haus Murphy’s sets the standard for German fare in the valley but its small dining room and downtown Glendale location make regular visits a challenge, unless you live in Glendale of course. Brat Haus in Scottdale is another option, but one similarly plagued by a somewhat challenging location. What’s a German beer and food lover to do?

Thankfully, Edelweiss Biergarten is here to the rescue. 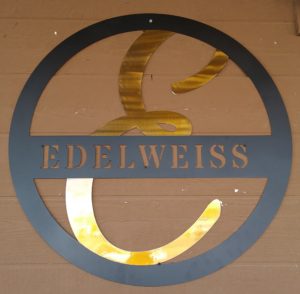 Edelweiss Biergarten opened in early September in the space that used to be the Wagon Yard, a western-themed bar on Bell Road, between 32nd Street and Cave Creek Road in north Phoenix. According to its bartenders, the bar was Wagon Yard one day and became Edelweiss the next. No downtime, no closing for renovations. Just a change of ownership and a change of menu and *Boom*…new restaurant. The fast change over means that Edelweiss still retains some of Wagon Yard’s décor. No cuckoo clocks or posters of the Alps here. The restrooms still have western themed signs. A large cow head hangs from the wall. The dining area also maintains a ‘western brown’ color. A few walls could be best described as ‘in transition.’  It wasn’t until my second visit, in late September, that they changed the sign on the street. On my third visit, a bar patron didn’t recognize the new sign, and thought he was still in Wagon Yard. Other than that, it’s German. Especially the menu. 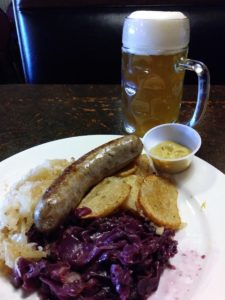 The website for Edelweiss states that the menu specializes in “German and Hungarian” cuisine. But when I look over it, it’s all German to me—sausages, schnitzels, pretzels, and the occasional pickled salad for good measure. I’ve had two dishes thus far: the Jagerschnitzel and the German Brats, both of which were decent. I’d like to see more flavor from the schnitzel and I still haven’t tried the spätzle yet, but the beer menu, or should I say, BIER menu, speaks to me with a mighty “Ja woll!”

In this month of September, the beer menu focuses on fall styles, which means Oktoberfest. Currently, there are three different Oktoberfest/Märzens on tap: Erdinger, Hacker, and Warsteiner. They also are serving Paulaner Märzen in bottles. I have never seen Hacker on tap (much less bottled) anywhere in Arizona before and Erdinger is exclusive to Edelweiss. 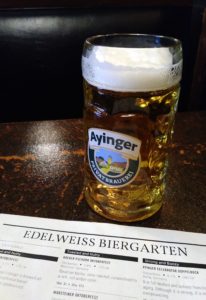 They also feature multiple other Ayinger styles as well as a delicious Hacker Munich Helles. No IPAs here…it’s all malty German beer. For the timid, they also pour Coors Light and Dos XX. But when in Germany…come on! Currently, they are also serving Czechvar Premium Pale Lager, which beer buffs should recognize as the “original” Budweiser. So, the beer program is pretty exciting and something we haven’t see in the valley for a long time. All German beer all the time! Even Haus Murphy’s beer menu isn’t as extensive as this.

To temper my excitement, I have to say I’ve seen some growing pains. On my very first visit, I was served a Paulaner Oktoberfest in a bottle, which was 5 months expired. [The bottle read: “Best by 4/18.”] Additionally, the bottle’s outer rim clearly had white gunk on it. All the drafts I’ve had have been fine. Speaking of drafts, when a bartender recently went to pour a liter, it appeared that the draft tower was unstable and nearly came off its base.

These are small issues, but if left unattended, might fester into something bigger. I hope not. Most don’t seem to notice. On my small handful of visits, business has been brisk, even in early afternoon. I’ve seen large groups coming in to socialize, barflies who think they are still in Wagon Yard, and older couples speaking German. That’s a good sign, right out of the gate. I trust the minor hiccups I’ve noted are rectified easily because I am anxious for more from Edelweiss. 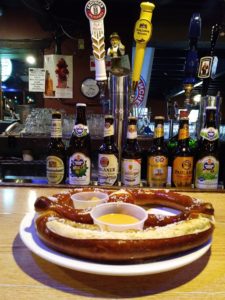 Yep…that’s a pretzel. Bring your friends…