In the Pixar film Ratatouille, food critic Anton Ego—in the course of reviewing Gusteau’s (the central restaurant of the film)—muses about the role of the critic. He says, “the work of a critic is easy.” They “risk very little” and “thrive on negative criticism, which is fun to write.” Ultimately, he concedes a “bitter truth”—that criticism may be an empty pursuit in that “the average piece of junk may be more meaningful than our criticism designating it so.”

I find this sentiment apropos to Desert Eagle Brewing in Mesa. I believe it to be an average piece of junk, but it clearly has significant meaning beyond my mere words and opinions. Just ask the throngs who inhabit the brewpub nightly.

One could make an argument that Desert Eagle is the anchor of the “new” downtown Mesa. Opening in 2012, they provided a stable presence in the downtown area at a time when there was little. The Mesa Arts Center had opened, but the city could not attract marquee restaurants to make downtown Mesa an evening “destination.” A variety of different eateries opened along Main Street, but they closed almost as soon as they opened. Desert Eagle bucked that trend and in the process delivered other far-reaching benefits to downtown Mesa.

More businesses slowly came to the neighborhood, notably Oro Brewing and Cider Corps. Their close proximity to Desert Eagle forms a nice little brew crawl, which Phoenix Magazine designated as “The Main Street Miracle” (further evidence that other municipalities and businesses had written off downtown Mesa).

Downtown Mesa now hosts an annual beer festival, which takes place at the intersection of Desert Eagle, Oro, and Cider Corps. When the light rail was up for expansion, planners chose Main Street as the route. While the light rail may bring some problems with it, it is also a boon for business. So successful has Desert Eagle been, they now have a second location, near Falcon Field in east Mesa. [Note: The only other Arizona breweries to have multiple locations include: Arizona Wilderness, OHSO, SanTan, State 48 and Four Peaks. That’s significant company.] All of which makes my evaluation of them somewhat frustrating. Unlike Anton Ego, I don’t thrive on negative criticism.

So, let me start with something positive: BBQ.

I found myself in downtown Mesa recently and decided to stop in. I did so somewhat begrudgingly, because I recalled that on my last visit—at least two years ago—I didn’t enjoy the beer. But, I did recall that the BBQ sandwich I had then was pretty good. Since I was quite hungry at the time, I opted to visit.

The BBQ didn’t disappoint. The beer did.

Despite Desert Eagle’s kitchen being small, the food is quite good. My BBQ sandwich that night was large and satisfying. The sauce was sweet and smoky which complemented the shredded chicken well. The bun was soft, with a toasted crust, which gave the bun a pretzel-like quality without having the heaviness of an actual pretzel bun. So, high marks for the eats.

But, the beer gives me pause.

One of my favorite books is All God’s Children and Blue Suede Shoes by Kenneth Myers. Myers spends significant time in the book trying to build criteria for evaluating popular culture that are not based on personal taste. Too often, he argues, we proclaim popular culture artifacts as artistically valuable simply because “we like it.” Our personal tastes become the arbiter of whether art is good or not. Myers believes that’s inadequate. Instead, he challenges us to get beyond personal taste and employ more universally accepted standards for evaluation.

Which brings me to Desert Eagle’s beer. I do not enjoy it.

According to Myers, this is an inadequate way to measure the beer’s value or “goodness.” This evaluation is far too reliant on my personal taste. Who says my opinion is the end-all, be-all? I’ve stewed on this over the last few days. I believe Myers has a point, not just about pop culture, but one that is applicable to all criticism. So, in an effort to employ more universally accepted standards of evaluation, I offer the following observation: Desert Eagle’s beers are not good representations of their respective styles. 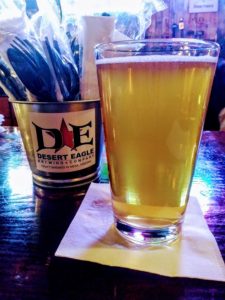 On my recent visit, I tasted two beers: the Main Street Blonde and the Buzz Bomb IPA. If I didn’t know the names/styles of these beers at the onset, I likely could not tell you the Blonde was a Blonde or that the IPA was an IPA. They diverge that much from acceptable standards.

The BJCP (Beer Judge Certification Program) dictates that a Blonde Ale should be “malt oriented with fruit/hop notes. Well-balanced and clean…without aggressive flavors.” What I experienced with Desert Eagle’s Blonde was light sweet malt with extreme, perhaps aggressive, herbal earthiness. Same with the IPA. BJCP calls for American IPAs to be “hop-forward with a clean fermentation profile; citrus, floral, pine, tropical, spicy; medium-high to very high hop bitterness. Malt flavor should be low to medium-low; clean and grainy; light caramel or toast flavors acceptable.” Yeah, I get none of that. The IPA seemed to be fighting with itself as it showed neither strong hop flavor nor recognizable malt flavor. When an IPA does it right, one can tell immediately…the flavor goes to the sweet spot of balance. I tasted this and could not discern a distinct flavor one way or the other. 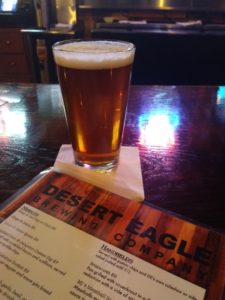 Of course, I could be completely wrong. I’m sure Desert Eagle will continue to pull people in. They do facilitate an important social element for Mesa—a place for community. But for my money, I’ll go a few doors down to Oro Brewing and enjoy a beer with a bit more discernible character. 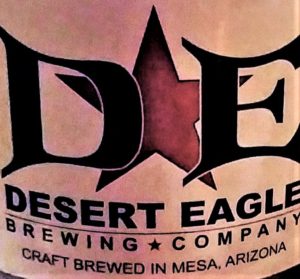