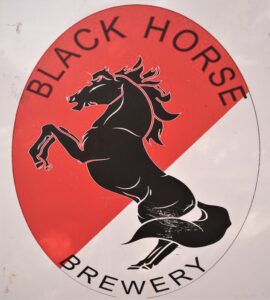 Black Horse Brewery is a small micro-brewery near Linden, Arizona, west of Show Low off of AZ 260. Pinetop Brewing Company gets the lion's share of attention in the White Mountains, but Black Horse offers a simpler, rustic alternative to the growing and somewhat touristy PBC.

Black Horse is off of Burton Road, about 10 minutes west of the AZ 260/60 junction. Flags  placed along the highway let you know where to turn. The taproom is in a moderately sized barn on a moderately sized ranch property. It's easy to find...just follow the signs.

The parking area is large, looking like it could accommodate upwards of fifty cars. This is somewhat ironic as the taproom itself has a bar with maybe four seats. There is an adjacent room with extra seating. 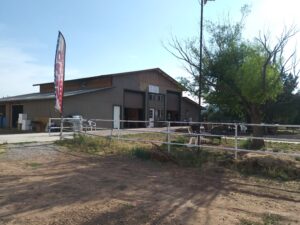 There's some extra seating outside the taproom, on a small porch, which is surrounded by an assortment of barbecue grills and smokers. The brewery hosts an occasional special event, such as a band performance and even a local homebrew competition. The brewery made an appearance at the 2018 Strong Beer Festival in Phoenix.

During my first visit, they had upwards of sixteen beers on tap. I ordered a flight of four samples, featuring my usual broad selection of styles: a blonde, a pale ale, an amber and a porter/stout. Current taps are listed on their website. 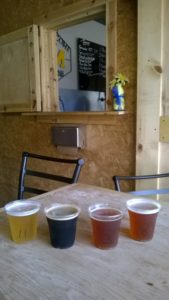