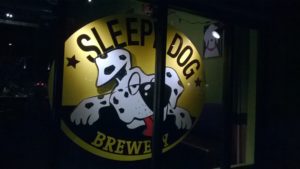 If you spend any time at all watching/participating in/reading about Arizona’s beer scene, Sleepy Dog is kind of hard to miss. They are everywhere. The cans, that is. You may never have tasted Sleepy Dog once, but you probably think you have, simply because you recall seeing the cans…everywhere.

Since Sleepy Dog opened in 2009, they have maintained a single small taproom in a small business complex on University Drive in Tempe, a short distance from ASU. But, they really grew their presence in Arizona by focusing on distribution and canning. It is hard to go into any beer store in the state where Sleepy Dog does not have a significant shelf presence. They were among the first craft breweries in the valley so their beer made it to store shelves early on. 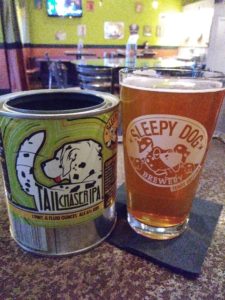 Their flagship beers—Red Rover, Tail Chaser, Peanut Butter Stout, Wet Snout Milk Stout—are easy to find nearly everywhere in Arizona. They are very much like THAT Brewery in that they maintain a small-ish storefront, yet the canning operation makes you feel like they could rival Four Peaks or San Tan in overall size. To maintain such a heavy production output, they must be doing something right. And generally, yes, they did and still are.

In 2017, Sleepy Dog was acquired by the Chicago-based Two Brothers. I’ve visited Sleepy Dog both before and after the sale and the impact seems to have been minimal. The beer remains pretty good and the taproom a nice place to spend a low-key evening. Despite their proximity to ASU, the taproom doesn’t draw the stereotypical college frat boy crowd. [Those young ‘uns probably don’t venture further than Mill Ave., thankfully.] 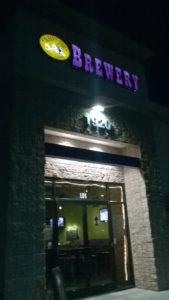 Instead, on a recent visit to Sleepy Dog, the clientele included two guys on laptops, two other guys who were enthralled with the World Track Championships playing on one of the TVs, a husband and wife easily in their 60s, a group of five gentlemen at the bar, and a single gal sitting in the corner reading a book. Low-key indeed. This is not the place for themed waitress outfits or rowdy cornhole tournaments. It’s where you go when you want to chill out and clear your head and maybe be left alone. 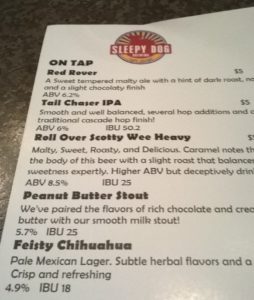 Perhaps the one casualty from Two Brothers’ take over of Sleepy Dog is the loss of ‘Scootcher’—my favorite Scotch Ale and one to rival Four Peaks’ Kilt Lifter. The beer does not appear on Sleepy Dog’s menu on their very limited website. Scootcher was never canned so the taproom was the only place you could get it, and it seems to be supplanted by a generic Wee Heavy. 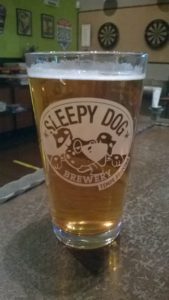 Thankfully, the Tail Chaser IPA makes up for its loss. It boasts a super velvety and smooth mouthfeel with a nice piney finish. The Peanut Butter Stout indeed tastes like peanut butter and fudge, but the overt sweetness limits me to nothing more than a taster of it. The newest beer on the menu is the ‘Feisty Chihuahua’, a Mexican lager. I was totally surprised by this as it features a full body and subtle sweetness, as opposed to the sharp, yeasty, lager-esque flavors found in Corona or Tecate. A nice change of pace. 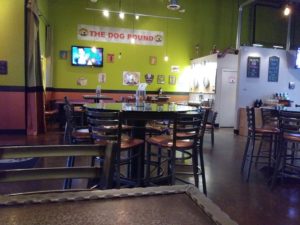 Walking through Sleepy Dog’s front door, you are immediately in the taproom. It is one large room, with super high ceilings, giving the space a very open feel. There are multiple types of seating, from high top tables, to standard tables, to bench seating along the right side and sofas on the left. The bar, which seats maybe eight, is in the back of the taproom and separates the tap room from the production floor behind it. If you visit at night when the lights are low, the fermentation tanks glow in the distance as they stretch to the back of the property. Kind of reminds me of Alec Baldwin chasing the bad guy/mole/Russian loyalist through the nuclear reactor in ‘Hunt for Red October.’ 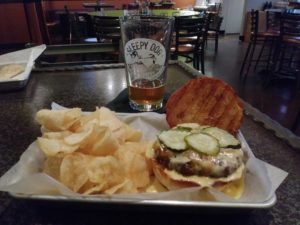 The tap room features several table games to choose from as well as two dart boards (what’s a pub without darts?). There is no outdoor seating. Sleepy Dog serves a few light pub foods like pretzels and nachos. Their best deal is a burger and chips for $5. They also feature a number of guest taps, although most of these are occupied by Two Brothers, ‘natch. 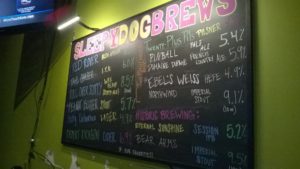 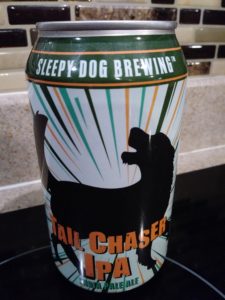 Sleepy Dog has undergone a "can update" -- new design, new artwork. Sleepy Dog is also canning and distributing "Feisty Chihuahua" which I love. I would drink that 10 times a day over other "international lagers." I have also noticed that Sleepy Dog is losing some retail shelf space. I can still find ample cans of Sleepy Dog in the big box stores, but competition seems to be squeezing them out of standard grocery stores. Whether that's the case, or this is a change in distribution strategy, remains to be seen. 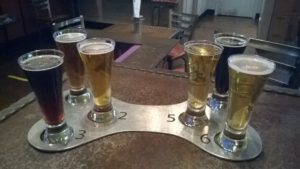 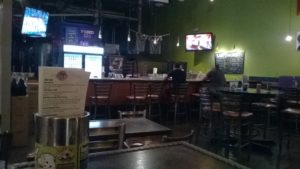 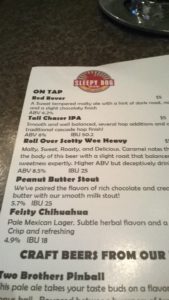