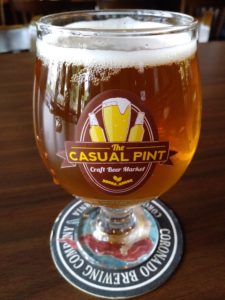 The Casual Pint is a national chain of beer pubs with two locations in Arizona—one in Chandler and one near the Esplanade complex in Phoenix at 16th Street and Highland.

The Causal Pint-Phoenix is on the southwest corner of 16th Street and Highland. It’s on the ground floor of the Crescent Highland condo complex, which immediately gives it a quasi-European vibe where city residents live above the stores and shops on the first floor. It’s kind of like a mini-High Street. There is ample parking within the building itself. If you are headed south on 16th, turn right into the garage immediately after The Casual Pint’s patio and you will find parking reserved for retail customers. If that’s full, head a little further to the multi-level garage. Speaking of the patio, it faces 16th Street to the east, meaning it is well shaded by happy hour and beyond. 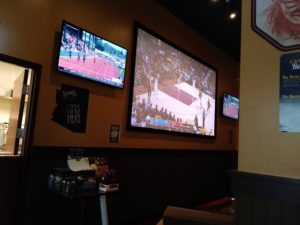 Inside, the Casual Pint is more or less one big room with three “areas.” From the garage entrance, to the right, you will see a seating area with couches and lounge chairs circling a few large screen TVs mounted to the wall; more or less in front of you is the bar with seating for 6 – 7; to the left further down is more seating, with standard tables and a community high-top creating room for maybe 20 or more patrons. 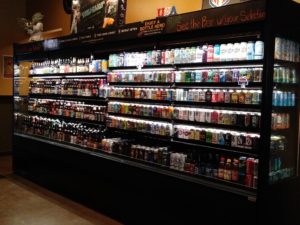 The Casual Pint uses the phrase “Craft Beer Market” on its glassware and it’s a fitting statement as there is ample focus on the “market” here. Lining the north walls, one sees hundreds, if not thousands of bottles and cans of beer for sale. There is a cooler that sells primarily singles (mostly for those who wish to consume them on site), but the remaining shelves hold an impressive collection of four and six packs of bottles and cans. 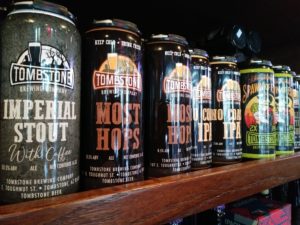 [One might say they are trying to fill the void left when Papago Brewing closed its doors and took its impressive retail collection with it.] Lining the shelves, one finds beer from Arizona, California, and beyond. [I did look for Pike Brewing from Seattle, but no luck]. 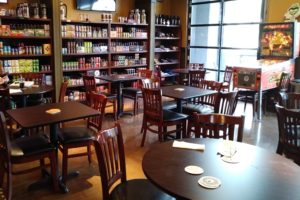 The first time I visited was on a Wednesday, around happy hour. The place was buzzing, the bar was full. I took a seat at a high-top table and was greeted immediately. I had a Saint Archer Mosaic IPA which was great. My second visit came around lunchtime on a nondescript Thursday. The place was nearly empty. I was alone at the bar. While I got a beer fairly quickly, the grilled cheese sandwich I ordered took a while. It was explained to me that my sandwich was not prepared right, and they had to start over. When it arrived, it looked (and tasted) like they made a flatbread and folded it in half to look like a sandwich. The ‘bread’ tasted like a cracker and the cheese was uninspired. I went nearly ten minutes with an empty glass before I was asked if I wanted another beer. So, there may be challenges still to be overcome.

The location may be a bit of a challenge too. On both of my visits, I noticed a lack of cell phone connectivity. For whatever reason, I can’t get a signal when I’m inside the bar. In the garage, you bet, but at the bar…forget it. Is the building’s construction blocking the signal or the surrounding high-rises? Maybe. And being on 16th Street…there’s not much else in the neighborhood to draw you here. I’m sure local residents like having a new clean, upscale, casual dining option (which Casual Pint certain is), but there’s not much else around. If you spend the evening at the Camelback Colonnade, which is across the 51 freeway from Casual Pint, you are likely to stay at the Colonnade. There’s not much else in the neighborhood, save for more residences. So, they have to overcome the potential loss of foot traffic. Causal Pint has an uphill climb here. What needs to be the draw is the beer selection. It has to be strong enough to drive craft beer fans to you. On that point, they are doing OK. 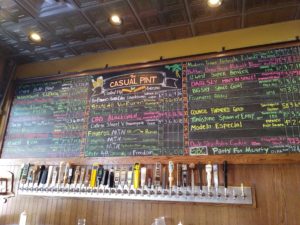 The Casual Pint is certainly plugged into the local beer scene as their tap choices are diverse and exciting (multiple brews from Dark Sky, FYITM from Shop and Tombstone IPA? YES, please). They also had a great line up of events for Arizona Beer Week 2018. So, there’s a lot to like here despite a few rough edges. But, is it enough to lure me away from my usual spots on a regular basis? Not yet.