If you think of Prescott and beer, you likely think of Prescott Brewing Company. Their brews appear readily on store shelves throughout the state and their flagship restaurant occupies prime real estate on Gurley Street in Prescott, right across the street from Courthouse Square. And that’s somewhat of a shame because Granite Mountain Brewing is the best brewery in Prescott you have likely never heard of. Begun in 2012 with a Kickstarter campaign, Granite Mountain has survived their nascent days and are now thriving, right around the corner from their friends at PBC. 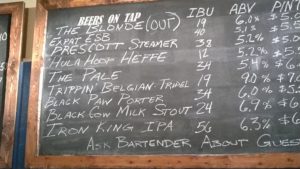 My lone visit to Granite Mountain proved they have earned a place in Arizona’s beer scene. I tried a flight of four different beers and they were all delicious: the Trippin’ Belgian Tripel, Black Paw Porter, Black Cow Milk Stout were all great. In 2018, they assembled one of the fuller calendar of events for Arizona Beer Week, offering eight events across the week’s official run of ten days.

Granite Mountain’s taproom in Prescott is on Cortez Street, about 50 yards north of Gurley Street and Courthouse Square. It is a short walk from anywhere in downtown Prescott, but because it is not on Gurley or Montezuma, you might overlook them. But don’t.

The taproom is indeed, a taproom as there is no food service, but the space is inviting. The room is narrow and the wooden serpentine bar runs nearly the length of the room. Fermentation tanks and other brewing items are behind the bar, putting you in the middle of the operation. The rest of the seating is largely comprised of couches and low-profile tables. The real feature of the room is the lighting feature behind the bar. Imagine a chandelier made of glass beer mugs, flattened and mounted sideways on the wall. Sounds funky, but it is creative and gives Granite Mountain a thoroughly modern appeal. 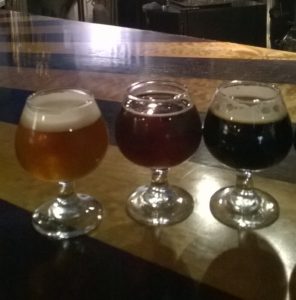 The taproom lacks the western trappings found throughout downtown Prescott and Whiskey Row, but that’s OK. After a while, all that kitsch becomes tiresome. Stepping back in time is fun the first time you do it, but it wears on you, especially if you have to fight the weekend crowds in Prescott. Take a break, step off Gurley Street and step into Granite Mountain.

Prescott’s central location in Arizona may tempt you to make your visit a day-trip—pop in, pop out, skip the hotel. Don’t. Try to get a room at the Hassayampa Inn, two blocks from Montezuma Street on Gurley and one block from Granite Mountain. The rooms at Hassayampa are small (it’s a ‘historic’ hotel, after all) but staying there will give you a bit more time to explore Prescott’s beer offerings. From there, you can navigate downtown Prescott on foot. Most of the chain hotels are too far from downtown Prescott to make walking an option.

Consider visiting Granite Mountain on Friday or Saturday night, when they are open later. Sundays, they close early, at 6pm. [NOTE: EVERYTHING in Prescott closes at 6p on Sunday…except Prescott Brewing…you might end up there for dinner!] If you have multiple days in town, spend Saturday exploring Prescott and then on Sunday, check out of the hotel and take Iron Springs Road west out of Prescott, toward Skull Valley. Stop by Barnstar Brewing on your way back to Phoenix.