Craft Beer Quick Stop in North Phoenix recently received an upgrade and it is glorious. 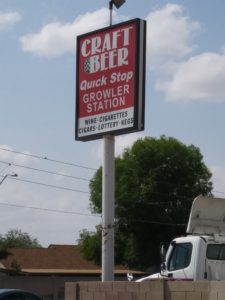 Craft Beer Quick Stop–on 7th Street just north of Union Hills–is one of the better bottle shops in north Phoenix. The diverse selection has always amazed but recently, they took steps to take their customer service to the next level with the addition of a fourth cooler.

For many years, Quick Stop followed the typical beer store floor plan–cash register at the door, three coolers lining the walls and overflow stock occupying just about ever inch of floor space, shelves reaching toward the ceiling. While select bottles and six packs would take up the coolers, wine, mead and more beer would take up residence on the floor, making for narrow aisles. [Granted, Tops Liquors in Tempe has made stocking floor space an art…that’s not quite the issue here.] But, the owners of Quick Stop have taken the initiative to now refrigerate a significant portion of their beer that wouldn’t ordinarily make it to the coolers, making for more space and incredible array of beer choices. 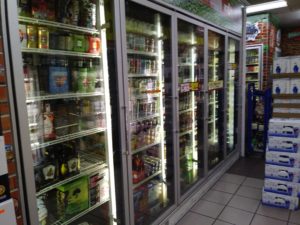 The fourth cooler was constructed near the rear of the store, just in front of the back cooler. It kind of has the effect of looking like you are in the frozen food/refrigerated section at the grocery store, where coolers are on both sides of you. While some of Quick Stop’s beer inventory still sits on the floor, the construction of a fourth cooler is an acknowledgement that beer is best served cold.

In addition to the fourth cooler, one cooler, on the south wall, was converted to a walk-in, making 12-packs not only accessible, but cold. 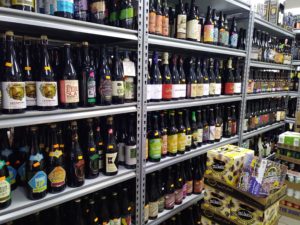 As I have already hinted, Craft Beer Quick Stop’s selection is terrific, rivaling most grocery stores and national chains. On a recent visit, they had cans of Pizza Port and The Dudes in stock. They also carry a large assortment of Arizona brews. On the same visit, I found several 4-packs from Thunder Canyon in Tucson, the first time I have EVER seen their beer canned and in a retail cooler. International beer has its own section, with healthy shelf space being devoted to British and German beers.

A great upgrade for a great bottle shop.