Simple Machine Brewing Company, the north Phoenix brewery that was supposed to be a Borderlands taproom until it wasn’t, is now open. 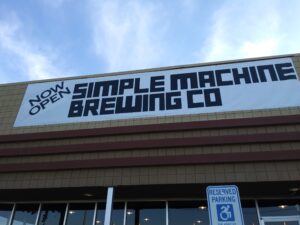 There had not been much news about Simple Machine since the story broke that owners Matt Wright and Marshall Norris had parted ways with Borderlands in late August. I headed to the brewery at 7th Ave. and Deer Valley last weekend to see if there had been any construction progress. Lo and behold, I saw the “Coming Soon” on their sign had changed to “Now Open.”

I immediately cleared my afternoons for the next six months.

OK, that’s only a slight exaggeration, but I did make a point to visit the next day, however. I arrived at 3p on a Monday and had to fight to get a bar seat. NOTE: The bar at Simple Machine is big (seats about 20) and it was nearly full at 3p. Word gets around fast.

The service area of Simple Machine seats around 65 total and features a mix of bar seats, high-top/barrel seats and standard tables. The bar itself runs nearly the entire length of the taproom and features a highly polished black marble (or concrete?) bar top. It is so elegant and pristine it reflects every ounce of light in the room. Windows completely encircle the taproom too, making it feel larger than it is. 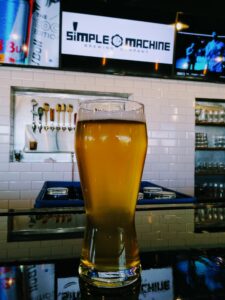 For now, Simple Machine is pouring beer from “their friends”, such as Helton, Throne, and even Borderlands. They do feature two collaborations, one with Borderlands. Ironically, for all the ruckus about their split with Borderlands, there is a lot of Borderlands paraphernalia around, such as beer mats and glassware. 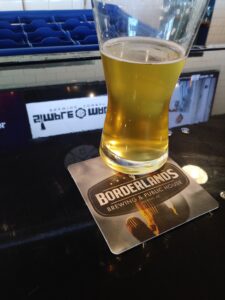 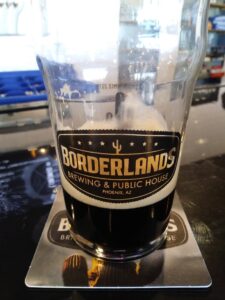 This could be a collector's item...

Speaking of being friendly, the owners of Front Pourch Brewing, the other recently opened brewery in north Phoenix, were at the taproom enjoying a pint. Front Pourch is closed on Mondays, so…yeah, why not?

For a limited time, Simple Machine is featuring a special promotion: Name all six simple machines (yes, that’s a thing) and you get $1 off each beer. Hint: It is a lot simpler than you think. The answer is all over the taproom.

Hopefully Simple Machine will be tapping their own brews soon.