The Arizona Republic recently confirmed what we’ve known here at Arizona Beer Traveler for a long time: Arizona is a great beer state. 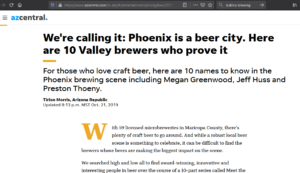 But why stop at Phoenix? The whole state should be getting more attention. But alas…it doesn’t.

I was reminded of Arizona’s lack of beer-related street cred as I was thinking about summer travel. I’m headed to Chicago this coming summer and have been toying with the idea of making it a ‘beer-cation.’ Rudimentary research about great beer cities left me frustrated for Arizona’s plight.

I get it that people will not want to vacation in Arizona in July or August. I wouldn’t. But Arizona offers some of the best weather in the country in February and March. Ask anyone who visits for Spring Training. [That’s beer drinking weather, by the way.]

Maybe we need a slogan to entice people to think better of Arizona beer. How about:

>Arizona: Come for Spring Training, Stay for the Beer

>Arizona Beer: We are more than just Four Peaks

>Arizona: We challenge your beer to a draw

>Arizona: Brewing enough beer since 2013 to fill the Grand Canyon

Eh…none of that works. How about something simple:

Arizona is a great beer state.