As I continue to study for the Certified Cicerone® exam, I am focusing more and more on food and beer pairings. This is a key element of the exam–one that I’ve heard frightens test takers to no end. As of late, every time I eat (and there is food and beer present) I find myself scrutinizing every bite, every sip, and every morsel. In restaurants, I fret over what to order as I search for what other beer writers have described as a magical-like convergence of beer and food, resulting in remarkable flavors and gustatory nirvana.

While I don’t think I have scaled such lofty culinary heights yet, I did recently–and unexpectedly–stumble across what I believe is as close to a perfect beer/food pairing as I have found since I began studying for the Cicerone exam. And believe it or not, it came from leftovers. 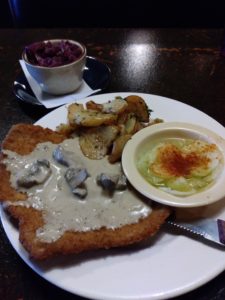 Readers of this blog know my predilection for German food and beer and for the recently opened Edelweiss Biergarten in north Phoenix. I visited Edelweiss on a recent weekend and ordered the Jägerschnitzel along with a Munich Helles. The food at Edelweiss is good and the portions are ample but that night, the pairing was kind of ho-hum. Perhaps I was over-thinking how to pair the schnitzel and to borrow a baseball metaphor, I swung and missed. I wound up taking most of the schnitzel home. When I re-heated the dish the next day however, it was a different experience.

When preparing my leftovers, I went looking for a German beer to go with them. I happened to have a König Ludwig Hefeweizen on hand. Now, I generally don’t like Hefeweizens. Out of over 350 beers in my Untappd profile, there are maybe six hefes. But German food demands a German beer, by golly! To my surprise and delight, it was the perfect choice. 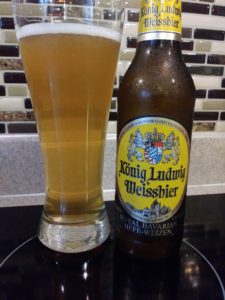 German hefes/wheats/weisses tend to show a lot of fruity esters along with the occasional whiff of strong clove. As a fan of malty lagers, hefes are just not to my liking. But, the flavor profile of König Ludwig Hefeweizen tends to be a bit more mellow. On Untappd, I wrote, “It’s a hefe for those who don’t like hefes.”

As I worked through the reheated dish, I found that the beer had mellowed even more, especially when paired with the schnitzel’s side dishes, not necessarily the schnitzel itself. German food is often served with red cabbage, sauerkraut, and potatoes. In this case, the sweetness of the red cabbage seemed to soften and balance the clove/fruit notes of the beer. That, in turn served the other elements (potatoes with brown gravy, sauerkraut, and the schnitzel) really well.

I’ve heard that on the Certified Cicerone exam, you not only need to know what pairings work, but WHY those pairing work. Pairing food and beer can be an inexact science, so the more you can explain and justify why something works (or doesn’t), the better. Typically, vegetable flavors (much less cabbage) are undesirable in beer. So, what gives?

I’m wondering if it is a case of “opposites attract.” On various beer “flavor wheels,” vegetables and fruits are on opposite ends. On one such chart, cabbage and banana are near opposite of each other. I wonder if the sweet of the red cabbage is interacting with the sweet of the esters in the beer. Lacking a more scientific explanation, I’ll just say, “it works!” And worked well.