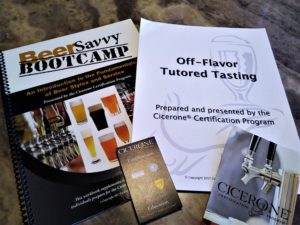 In May, I participated in two training classes intended to help me prepare for the Certified Cicerone® exam: an off-flavor tasting and Cicerone’s own Beer Savvy short course. Both were held in Hawthorne, California at Common Space Brewery (a stone’s throw from Los Angeles Aleworks, whom I’ve written—and raved—about). Both sessions were led by Thomas Kelley of El Segundo Brewing.

The off-flavor tasting came first. We (there were about 30 participants total) spent perhaps two hours discussing not just ways that beer can go bad but relearning how to taste beer. Flavor is actually quite a complicated subject and to properly detect off-flavors, one needs to understand how the tongue and nose combine to create what we know as taste and flavor. Flavor comes from a mix of what you smell and what you taste. So, we spent ample time practicing swirling and sniffing beer before we ever got to sampling.

When we did, we took turns detecting the six most common off-flavors found in (bad) beer: creamed corn (created by DMS), butter (diacetyl), green apple (acetaldehyde), wet cardboard (trans-2-nonenal), skunk (lightstruck), and plastic/vinegar (general infection). I found this to be much more difficult than I thought. While I am pretty confident in reciting the information about these off-flavors, identifying them in blind taste tests proved to be another matter.

We were all promised that the samples we tasted were spiked over and above anything we might find in normal beer production practice, but I had a very difficult time detecting what others seemed to readily sense. I ended up ranking how easy each off-flavor was for me to detect and I ended up with: (easy) Lightstruck, wet cardboard, creamed corn, plastic, butter, green apple (hard). Acetic acid, diacetyl and acetaldehyde—the lower three—seemed non-existent to me. Lightstruck was easy…it smelled like Corona. [Come to think of it…that means every Corona I’ve ever had has been lightstruck!] I could taste wet cardboard pretty easy too, but as I went, it got more difficult. As I looked over my notes, five of the six off-flavors were primarily detected through sense of smell. Actually tasting the off-flavor was a primary means of detection in only trans-2-nonenal (cardboard) and a secondary means in only two others. I seriously was having a hard time.

As I thought through it all, I am wondering if my lifetime of severe allergies has impacted my ability to detect such subtle flavors. I’ve been using prescription nasal sprays for over 20 years and I never thought it could impact my ability to smell until now. I had hoped to come away from the off-flavor tasting with confidence in this portion of my beer knowledge, but now I know one thing…I need to take another off-flavor course before my exam.

The second day was spent learning about basic beer service and the six primary beer styles (there are only six, if you can believe it). They key point Thomas wanted to make was that beer should always be presented properly, just like any other restaurant food. Waiters are trained to discuss all the dishes on the menu and make corrections when something is wrong. I mean, if you order a thin crust cheese pizza and what arrives at your table is a pan crust sausage pie, the waiter better fix it. Same with beer. Know what you are serving and be able to fix it when it isn’t right.

I’ll review the six basic beer styles in a future post, but part of our learning for this segment included handling (and sampling) raw beer ingredients. While I’ve handled hop cones fairly recently, it was the first time in ages that I actually handled barley/malt and I’ve never seen hop pellets.

Chris Cohen, the Beer Scholar, reminds us that a Cicerone should know beer from the ingredients to the bottle. This was a fun way (hey, we drank a lot of beer that day too) to put that maxim into practice.