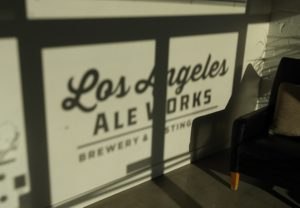 A trip to Los Angeles this month to participate in a pair of Cicerone® training courses afforded me the opportunity to visit several southland breweries. Among the breweries I visited, Hawthorne's L.A. Aleworks surprised me, delighted me, and otherwise made me want to jump into the air, pump my fists and shout "Yeah!" Of course, my generally reserved demeanor prevents any such public displays of enthusiasm, so I'll just reiterate here in print that L.A. Aleworks is awesome. If you are ever in Los Angeles and don't visit, what's wrong with you? Put it number one on your list of "Things to Do in LA." Seriously.

I must confess that my own visit was brief--perhaps an hour and a half at most. But in that time, the beer I sampled was amazing, the space was inviting, the food truck on site was delicious and when it was all over, I yearned for more. I almost wanted to ditch my training course and stay longer, but I had pre-paid for it so...oh well. 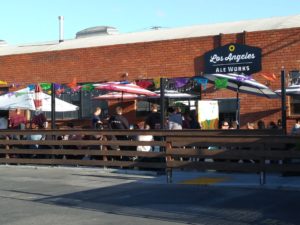 L.A. Aleworks is housed in a red brick building in the industrial district of Hawthorne, California, just south of the Hawthorne airport and a stone's throw from Space X. The area is dense with red brick buildings and without Google Maps, you might wind up at a dry cleaning supply warehouse or an auto-body repair center. I guess that was the surprising part of my visit--that something so amazing could be found among the mass urban sprawl of southern California. Maybe I shouldn't be surprised at all as this is the craft brewery playbook--recondition and repurpose older spaces into communal gathering places. This is what LA Aleworks has done. Their extended patio with brightly colored flags and umbrellas makes the building inviting, helping it stand out among the din of others. Inside, the bright colors continue with hand-drawn menus and funky decor. The colors perhaps whisper to visitors "snap out of your dreariness. There's beer inside." 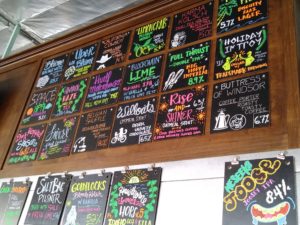 And the beer is glorious. I sampled two brews while at LA Aleworks: the Rick and Morty-inspired "Meseeks Joose" hazy double IPA and the "Palmera" Pils. Both were among the best representations of their styles I've had in a long time. 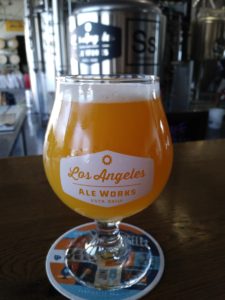 The hazy IPA had a great blend of citrus and stonefruit flavors and I noticed that the flavors sustained through the entire beer and through each taste. The more I practice proper beer tasting, I know I am supposed to be mindful of various flavors and aromas that may present themselves at various stages of tasting. But dang it, once I find a flavor I like, I tend to want to experience that flavor a lot. I can't stand it when a beer tastes like one thing on first sip and turns negative after you swallow. A lot of hazy IPAs do this...start sweet and turn flat, sour or overly dank on the finish. "Meseeks Joose" presented a consistent mango/apricot/orange vibe through each sip. On Untappd, I wrote "Puts just about all other juicy IPAs to shame." 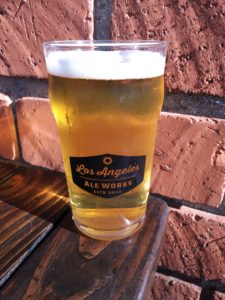 The "Palmera Pils" was just as on-point, with a solid, mildly sweet biscuity flavor shining through. The light Saaz hops gave the beer balance, a clean profile and drinkability. Paired with the tacos from Macheen Tacos that night, I thought I found beer nirvana. 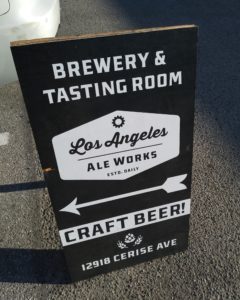 My wife and I have often observed that people not born in LA tend to hate visiting LA. Coming from elsewhere in the states, LA can be a challenge: the traffic, the smog, the DMV. When you live in a place with wide open spaces, LA seems mind-boggling and claustrophobic. LA Aleworks offers some respite from all that. If you find yourself in Los Angeles, add a visit to your itinerary, and "snap out of your dreariness. There's beer inside."