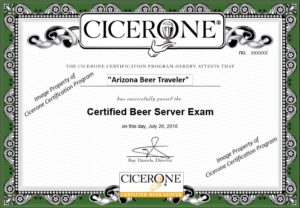 Today, I passed the Cicerone® Certified Beer Server exam. Whoo-hoo! I celebrated by pouring myself a beer. [For the record, it was an out-of-date Four Peaks Kilt Lifter, into a nonic pint glass. Go figure.]

The Certified Beer Server (CBS) exam is the lowest level of Cicerone certification and the prerequisite to the larger, more difficult Certified Cicerone exam. My goal is to take the Certified exam in November and I wanted to pass the CBS exam as early as possible. At least I did something productive this summer.

The CBS exam is taken on-line through the Cicerone website. It is a 60 question multi-choice exam, but the tricky part is that it is a timed test. You have 30 minutes to complete the exam, meaning you have perhaps 30 seconds to ponder each question. The questions appear on screen one at a time and once you answer, you can not go back and change your response. Although I finished in 23 minutes, I felt the pressure of the clock. It seemed like I was racing. Fortunately, second-guessing was kept to a minimum and I passed with a 93%.

Forty percent of the exam questions were about “Keeping and Serving Beer”—bartender stuff. I aced all 24 of those questions. While I likely will never work as a bartender, I studied this section of the material the most. I knew almost nothing about draft systems or bartender etiquette in December, so I dove into that material head-first. That helped.

Twenty-one of the sixty questions were about beer styles. This is probably the largest single chunk of beer knowledge one needs to master because there are so many styles to know and multiple elements about each style to learn. You must know alcohol level, bitterness level, color, taste profiles, and so on, for 38 beers for the CBS exam. [And then some for the Certified Exam.]

These questions seemed to be written in two ways. First, I’d see questions such as “__________ is an example of what style of beer?” On the exam, I was asked about a particularly famous Belgian beer and I second guessed myself and got the question wrong. Fortunately, it didn’t hurt my final result. Second, there were questions like, “American IPAs are typified by what characteristic?” and then, there would be a list of four characteristics, with three being wildly wrong. On my exam, I missed one of these questions, about German Pils. I do wish I aced this section of the exam. Oh well. Now I know what I need to review for the next exam.

Finally, there were nine questions about Beer Tasting and Evaluation. I got two of these wrong.

Now that I’m on this side of the CBS exam, a few observations:

First, I felt I was properly prepared, maybe over-prepared. I’ve been reading Tasting Beer by Randy Mosher as well as several other beer-books, mostly by Michael Jackson. I have poured over study materials by The Beer Scholar Chris Cohen. I’ve taken classes sponsored by Cicerone. They have all proved to be exactly what they claim to be—helpful and fun ways to prepare for the exams and learn about beer.

Second, regarding the CBS exam itself: there’s no trickery involved. No trick questions. All sixty questions drew from the Cicerone syllabus. I found that the questions I got wrong were because I second-guessed myself. As I pondered the questions, I asked myself if Cicerone was trying to be sneaky with the questions. Nope. They are all very straight forward. As an educator, I understand exam design theory. On multiple choice tests, where you have four responses to each question, at least two responses will be wildly wrong. That was true here. If you know the material, it will be obvious. That helps when you need to work quickly. The task then is to decide between the remaining two options. On multiple choice tests, sometimes two responses will be close to being correct. They both seem like they might be right, and you pull your hair out trying to decide which one is “more correct.” On the CBS exam, that wasn’t the case. No splitting hairs here. For each question, there was ONE right answer.